New England Voices in Harmony has returned to in-person rehearsals with protocols in place so we can safely sing together!

We would love to have you join us at a rehearsal to discover Harmony with us and consider membership.

Please call us at 603-686-SING or email us at membership@nevoices.groupanizer.com for more information.

We look forward to meeting you! 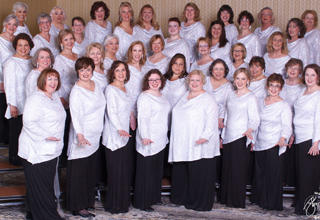 Harmony, Inc. is an international, non-profit, educational and singing organization for women. New England Voices in Harmony is a local chapter based in Nashua, NH founded in January 2000.

You are invited to explore membership in New England Voices in Harmony to add some harmony to your life! We look forward to making a place on the risers for you! 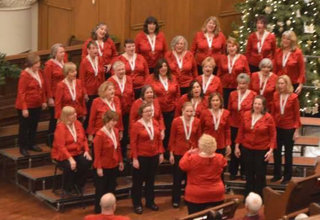 Let Us Entertain You! New England Voices in Harmony enjoys performing for audiences both large and small:  from weddings, private parties and social clubs, to church, community or charitable organizations.

We are proud to have been the 2018 International Chorus Champions

Watch current videos on this page!

The influence of music teachers is readily apparent in the story of this quarter’s spotlight member: Diane Fagerstrom.
A “great music teacher in third grade,” she says, introduced her to singing. In this case, Puff the Magic Dragon and Silent Night (in German, no less). And when she got to Gardiner High School, she did NOT like the band director, so she joined chorus. She has been singing ever since.
Born in Gardiner, Mass, she has lived in the same house practically all her life. She has been married to her “wonderful” husband, Alan, for 47 years. They have four children and several grandchildren scattered all over the Eastern seaboard, two in Massachusetts, one in Maryland (daughter Carey, also a member of NEVIH) and one in Delray Beach, Florida.
Diane is a classically trained tenor singer, taught by the organist at her church from 7th grade to college. Her high school sponsored a musical each year and she participated in HMS Pinafore, Finnian’s Rainbow, and South Pacific. This year will not be her first introduction to Sound of Music. In 11th grade, she earned the part of Sister Margaretta, the laughing nun, in Sound of Music. She says she had a lot of fun and ended up singing all the highest parts because she was the only one who could. Her high school chorus director “could not believe that I always sang sharp. So I had to put a brick on it back then,” she explains.
At her high school graduation, she directed her classmates in the singing of their alma mater. She began college at Mount Wachusett Community College where not only did she take more music courses, she also helped form a madrigal chorus which later performed with other college choruses. She transferred to Fitchburg State (now University) as a math major but ended up with a Bachelor of Science in Accounting. All this time she sang in choirs in church and actually became “a paid soloist in the Christian Scientist Church in Fitchburg.”
Diane says that she worked for the accounting firm Venning & Jacques, Inc., for 35 years and 7 months. She did everything from payroll — including payroll taxes — to individual and corporate returns. She explains that she also “became the internal IT person, loading all the programs and trying to keep the computer running correctly.”
Diane’s background in barbershop style singing is massive. She was a charter member of the Chair City Pipers, (now Surround Sound) from their inception in 1972 until December of 1991. She was assistant director and became director from 1984 until 1991 when former director Jean Patterson left.
“I joined Women of Note in January of 1992 and sang with them until 2009. I once again became assistant director under Jean Patterson,” she explains. She sang with Debbie Borsari in Women of Note and Debbie told Diane that she wanted to start a chapter closer to where she lived in New Hampshire with her sister, Wendy. Thus was born a little chorus called New England Voices in Harmony. Diane joined Voices in 2007 and hasn’t looked back. She is tenor section leader, was assistant director for a time, has been in numerous quartets, and is currently on the Board of Directors as Member-at-Large.
Diane, who always has a smile, is an enthusiastic proponent of quartets and is always willing to help those of us who may be too shy to sing in a quartet. Some of her many, many quartets over the years include Rainbow Reflection, Heartsong, Starstruck, Diva L’Differance, Under Construction, Just Sayin’, Family Fun, and Out on a Limb. She points out that “Four quartets had 10 members that competed for the first time at Area 2.” Quite a feat.
“I love this chorus,” she says, “because of the challenge to be excellent. Striving to be the best we can be. And the fact that I have two blue medals, plus 7 others … I hope that we can (someday) attain A’s in all three scoring categories.”
And there you have it. Always striving to be better, with a smile on her lips and joy in her heart: Diane Fagerstrom, our Barbershopper of the Year.