Our Excellence Training Weekend is coming up, which always gives us a focused opportunity for fresh perspectives and advancing our skills to the next level. This year we are excited to have David McEachern as our coach. He is an accomplished story-teller through the craft of barbershop, contributing to development of performances of the Toronto Northern Lights (his home chorus) that have featured not only vegetables, but robots, beggars, mimes, vampires, magicians…

David has a passion for supporting people in “owning” their abilities. The website for McEachern & Associates, his eldercare business (because, although it’s hard to imagine, most of us have lives outside of barbershop singing!) includes the following statement: “With residents we cultivate a philosophy of facilitating independence rather than simply providing care.” He brings this same focus to his coaching as well, supporting many groups around the world in their journey from a basic understanding of skills…to knowing what they don’t know…to concentrating on bringing their best…and finally – through much repetition – to unconsciously bringing their best.

Music and performance have been a part of his life for many years. His original musical background is in folk and bluegrass music, and he continues to perform in theater productions and comedy shows in his local community. His most recent role was Lurch in The Addams Family, which could be common ground for some of us! David has been involved in barbershop music for decades as a performer (it is apparently quite obvious that he sings bass), certified performance judge, and coach/lecturer. He has been on the faculty of Harmony University numerous times, and is a premier visual performance coach both within his own chorus and for many other choruses and quartets around the world. That he is a certified chef as well only makes us disappointed we won’t be able to spend more mealtimes with him!

His approach to “living the music” is consistent with New England Voices in Harmony’s goals: he digs deep for experiences that bring vulnerability and truth to even the most comedic of performances. Whether he is playing the part of a six-foot-four sunflower or using that height to “lose his head” as a robot, he brings his personal talent and energy as a member of the chorus ensemble in just the same way each one of us does. His chorus is hardworking (an article published in The Star Edition in 2013 notes that his home chorus is more like a “competitive AA hockey team” than “house league baseball”), and just like us, he values the relationships forged by that work together as much as the excellence in performance that results.

We look forward to welcoming David to the New England Voices in Harmony family as we prepare to spend a couple of “days at the park” with him! 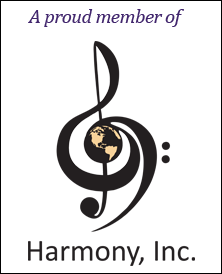